Written by Tejs Rasmussen
Updated over a week ago

We are back with another exciting release!

It's no secret that we aim at having the most capable color reference logic out there. To stay ahead of the competition, we introduced a couple of new things today.

We've made it possible to let the color reference be generated from a production type and from a certain step in the process. This allows for a process where the color refs are getting dialed in mid-process. 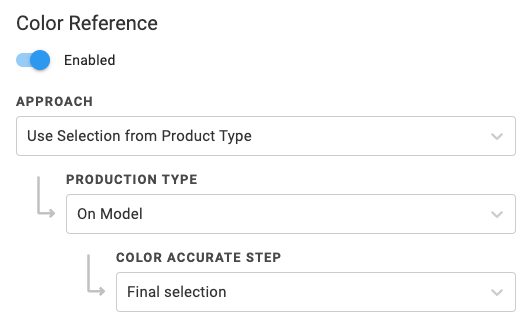 We made the auto mapping in the vendor portal a bit smarter, so it also is able to auto map a correctly named color reference.

We are happy to finally say hello to a much requested feature!
The ability to drag from one position to another in Final Selection.. 🎉 🥳

We decided to combine the sample screens in Creative Force. Maybe you didn't know, but up until today, we had a dedicated wardrobe sample screen and production sample screen. These are now one and the same. This should make it easier to get the full picture of available samples, even when some are in the sample wardrobe.

We've launched a production view for Editorial similar to the one we have for E-comm.

This will bring even more overview and control to the editorial production.

We're striving to create the best product for you and your team! Feel free to drop us a line via email/chat, or submit your ideas and feedback directly to our product team via product@creativeforce.io